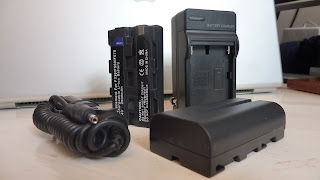 I really like the fact that the latest generation of accessories like lights and monitors facilitate the use of camera batteries. Many of us have a lot of spare batteries for their camera(s) and it is nice to be able to click one onto a light and have more power than AA-batteries can provide. Ever since I own a LED Z96 light, I have used it with my Sony L-series batteries. In the meanwhile, I have sold my Z1 but I kept one heavy duty L-series battery and the small NP-F570 that came with the camera. (which I alway considered useless since it wouldn't last more than 45 minutes) After I received my led-light, this little battery started a new life and has served me well. 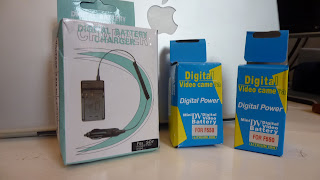 But when I sold the Sony Z1 recently, I lost my charger. So I went looking for a replacement charger. Instead, I found a charger plus 2 replacement NP-F570 for a price I didn't even think I could buy a charger alone!

It took quite a long time to arrive: I ordered the package over a month and only yesterday it was delivered. The big white envelope was a little torn and so were the boxes inside, but the goodies were in good shape: 2 batteries, a charger and a cord to enable charging in the car. These are lithium-ion batteries and boast a capacity of 2500 mAh, which is more than the original Sony, which I believe max out at 2200. They look and feel solid and professional. 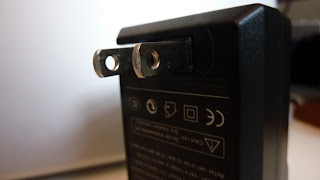 The little plastic charger say 'travel charger' and that's what it looks like. It has a flipout (US) plug but luckily I have a few adapter plugs to fit European sockets. Interestingly, you can slide the batteryplate off the charger, probably to enable charging a different battery with a different plate.(not included)

I charged the batteries for around 3 hours. The charger features a little red light when charging which turns green after the batteries are charged. I always leave them in for an extra half hour to fully 'saturate' them.
I attached the battery to my HDV-Z96, turned it on at maximum light output and left it burning. Only after 2,5 hours did the battery die, which I think is pretty impressive. At US $27,95 including shipping, you really can't go wrong. (heck, I thought I could just get a charger for that price!) I just looked up the seller for this particular combo and he doesn't offer it anymore. He does, however, offer the same batteries for US $4,60 each and he uses the same type of chargers (with different battery plates) for other batteries so they should not be hard to come by. 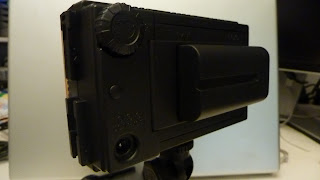 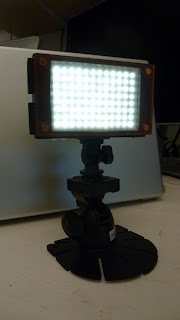