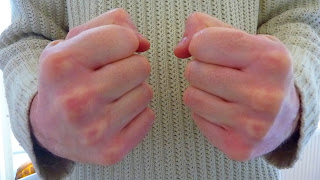 I got suckered into re-editing my assignment 3 times, buying several types of dvd-packages that were rejected and I am now designing and printing dvd-covers which I vowed never to do again. And between every step sits around 2 weeks, which means that this assignment has been lingering for months and I haven't received a penny so far.

I thought I had my bases covered: in the contract I noted that 'the customer has a right to one editorial round' (one re-edit) and that I will deliver one master dvd. 'Customer is responsible for DVD-box and design, if desired.'

I had written a script for a 'lobby-film'; a film intended to raise funds for a business project. I suggested that 5 minutes was max for watching this not-too-flashy subjectmatter but there were a few speakers inserted into the film for 'political reasons'. (Like the guy who paid for the film and a friend of his.)

The film  was edited and submitted for feedback. There were a few minor changes and I was all set. So I thought... Then the boss took a second look and decided for another change. Then the boss' wife said it was too long and needed to be cut down to 5 minutes. (I agreed! But the changes that she suggested killed the film.)

Then 2 days it was suddenly decided to leave it as it was except for one little change.

I finished the film, burned it to dvd and handed over the master. Then they wanted 25 copies. No box, no inlay or anything. I burned to discs and gave it to her in little cd-envelopes. She wanted plastic ones so I went to the store and bought plastic ones. A day later she wanted the HARD plastic ones. I went back to the store and bought HARD plastic ones. Just when I came home from the store, she said her boss had changed his mind and wanted a decent dvd-box with inlay.
I gave her a minimal price for designing a simple box. I submitted the design. Nice but... two changes...

It's been over a week and I haven't heard anything. Then my contact says her bosses dvd player wouldn't play my dvd correctly. I checked 9 of the 25 dvd's on my dvd-player and alle played fine. Could I see that particular dvd? "Don't count on it, he is very forgetful..." she told me.
I asked if we could go ahead with the printing of the inlay? "How much were the printing costs", she asks me. I say I emailed that 2 days ago. She says she lost the email with my quote and asked me not once but twice to resend email. Client: "I never received it." Me: "but I have a confirmation that you received it right here". Client: "O, really..?"

What can you do? The amount of extra work and energy I have to put into these assignments... I can never get paid for it enough. I thought I had it covered. But there is no contractual phrasing for lack of professionalism.
Posted by Jeroen Wolf at 9:07 AM