The free alternative to FCP? (or Premiere, Avid...) 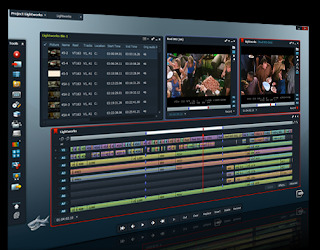 Now that many of us are forced to learn new skills to edit video, the market is completely open again. Delve in and learn FCP X? Move to Adobe Premiere? Switch to Avid? No matter what decision, FCP users are going to have to spend some money and start from scratch. We can start all over again and there really is no compelling need to even stay with Apple hardware...
But do we really have to pull out are wallets again? Maybe not. I'm surpised I haven't heard about this before but there is some amazing open source (ie FREE!) editing software that has very professional features. It is called Lightworks and it has been used by a professional editor on the magnificent 'The King's Speech', a film that was nominated for an Oscar and Bafta award.

It is still Beta, and you have to register before being able to download. For the moment it is Windows only but if you run bootcamp (Os X and Windows both installed on a Mac) that shouldn't be a problem. I just downloaded and when installing it one of the first options was to use the FCP keyboard layout as default. That made me feel welcome! Here's the first in a series of tutorials (by the same producer) that gives you a nice idea how the editing software looks and performs.