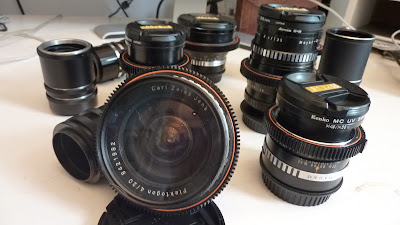 Earlier this year I bought a set of Carl-Zeiss Jena and Meyer-Optik prime lenses that had been modified for film-use. The seller had made the aperture-rings click-less for smooth, jitter-free aperture adjustment and every lens had a custom-made gear ring for easier focussing, with or without follow-focus.
The seller considered this a set 'that belonged together' because the footage of these lenses was supposed to cut well together and the lenses cover a nice range from 20mm to 135mm.
Meanwhile I had been bitten by the lens-bug and have acquired quite a few other lenses, impulsively or because I had really liked the footage that was shot with that particular lens. I have shot a lot of footage with all these lenses but never really tested that first collection of Carl-Zeiss Jena's and Meyer-Optik's.
In the next week I'm planning to put this collection to the test and see what makes these lenses special.