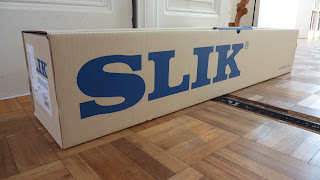 I received my Slik tripod today that I was very much looking forward to. My Manfrotto 525P kit is just too bulky and heavy when riding my bicycle around town to shoot video. (or the occasional photograph)
Besides, I already had a Fancier 717AH video head and only needed an extra pair of legs to have a second tripod for events and video registrations.
I bought this from a US eBay seller and got slapped with €30 VAT and import taxes when the courier delivered at the door. As a business, I get the VAT back (€20) and the import tax I can deduct later on but still... this was the first time in years I had to pay for importing gear. I had practically forgotten about these taxes! It's probably because it's the biggest piece of gear I have imported in years.


First impressions: light yet sturdy, levers feel solid. Maximum usable height for panning with video is around 175 cm (5 ft 8 inches). Even though the center column will raise you an extra 30 cm (1 ft), such a platform is not designed for video and will not allow for smooth pans. For static shots, it is nice to have the extra height though.

The tripod is much less bulky than my Manfrotto 525 but the weight difference is not as big as expected: about 1 kilo (2.2 lbs). In large part, this is because of the Manfrotto 438 ball camera leveler I so desperately wanted for a portable tripod. The leveler sits between the Fancier tripod head and the tripod and adds half a kilo. But I'd rather carry that extra weight than have to wrestle with tripod legs to level my camera... there's always a compromise. Also, the Manfrotto 438 adds a little height to the tripod, making the setup when folded slightly taller than the Manfrotto 525 P kit.
The Slik Pro's legs can be extended in two stages. Additionally, the legs' angle can be adjusted in 3 stages to get all the low and high angles you need. All in all, this tripod looks and feels good but will have to prove itself in the field. It is not up to par with a real video tripod like the Manfrotto 525P kit but at 1/4 of the price no one would expect that. About performance and durability I will write more once it's taken some beatings during my bike rides around town.