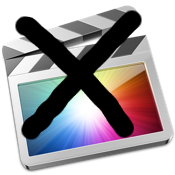 This hurts. A lot of bad stuff has been written about the new Final Cut. And rightly so. It appears Apple has said goodbye to professional video editing environments. There's just too much to neglect. No backwards compatibility with 'vintage' FCP, no multicam editing, lousy compatibility with other postproduction software, no professional external monitoring, no way to customize media organization, no capture from or to tape (aside from firewire), the list goes on.
And yet... FCP could still be for me. I am a one man band and almost exclusively deliver finished projects, quicktime files. I just signed up for an informative meeting around FCP X, to get the nitty gritty from the pro's. I am unsure whether to buy: should I go Adobe Premiere, AVID?

The world has changed. FCP is no longer the realm of video professionals. It belongs to the masses. A revolution is about to take place. What will happen to all the usergroups? Los Angeles Final Cut Pro User Group? L-AVID-UG? LA-AP-UG. Or the more generic LA-VIDEOEDIT-UG? The base of these groups may very well disintegrate. Macvideo? Will it lose its following? The Mac has lost its exclusive, cutting edge image. It aims for the Big Numbers. If financial success is a measure, then hipster Mac has become the new nerdy Microsoft...
Posted by Jeroen Wolf at 8:56 AM