We read the friggin' manual! (update) 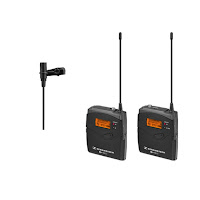 A while ago I wrote about my struggles with a brand new Sennheiser wireless G3 set that would not work. Three experienced videographers and a professional sound engineer could not get a signal out of that particular set. It was a frustrating and humbling experience. My friend spent an entire evening knitpicking the manual, came to me in sheer desperation the morning he was supposed to shoot with it for the first time and finally took my G2 set because I wasn't succesfull, either.
He sent the set back to the store and received a new one a week later. He hooked the set up to his camera, turned it on and... no signal... Not again! But a second later he discovered he had hooked up the transmitter to the camera instead of the receiver... Switched them around and by god, a signal! So yes, very once in a while you have memorized the manual and things still don't work... you just happened to have that one-in-a-thousand-lemon...
Posted by Jeroen Wolf at 2:44 AM