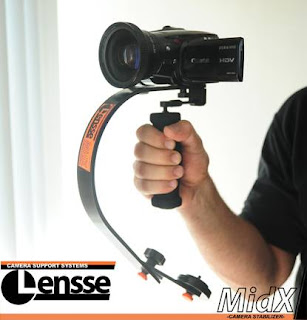 Some sort of steadicam-device is part of many filmers' toolbox but somehow rarely used. (And then there's a few that completely overdo it and use the 'fly-cam' all the time.) I guess that's because we are always under pressure to get the shots and the steady-shot is -usually- not essential for the edit. And most of us have never really mastered the technique.
I once bought a Steadicam Merlin and used it maybe 5 times in my paid productions. That's almost 200 bucks per shot! And they never lasted longer than 4-5 seconds because that would be the point where the rig started to bop and sway... I never really got the hang of it and I'm sure that's because I didn't practice enough. I finally sold it because I couldn't balance my EX1 on it. Two months or so later I bought my DSLR and they would have worked together perfectly... It figures.
A week or so ago I saw some nice results that someone achieved with a 100,- Hague steadicam device much like the Merlin design, but in a budget version. He wrote he was able to stabilize it fairly quickly. I paid 9 times that much for my Merlin and the results looked the same. So I became interested and noticed these stabilizers are sold under different names. The (Turkish?) company Lensse seems to be the source manufacturer and sells them even cheaper. I decided that if I could win an eBay auction for around 50 euro's I would buy one. And I did! So if I only use it 5 times for my productions, that would amount to 10,- a shot. I can live with that.
Posted by Jeroen Wolf at 1:49 AM