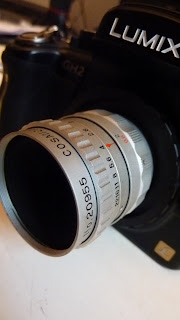 About 6 months ago I bought a silver, metal little lens. I had just discovered c-mount lenses and was lusting after unusual, old lenses(and preferably a combination of the 2). I found a Cosmicar 25mm 1.4 television lens on a Dutch website for secondhand articles and I bought it for around €80,-
Now recently I've been working on a little project and I've been using this Cosmicar lens in combination with the GH2. It's sharp, colors are nicely saturated but there's some heavy vignetting when stopping this lens down so I have been trying to find out what thread size I need for a ND filter. Turns out that's one tough piece of information to come by..! These lenses are very rare.
Cosmicar has been taken over by Pentax and the new Pentax 25mm 1.4 is a different lens altogether and has different measurements. I found one picture of the exact same lens as mine on Flickr but that account has been inactive for 2 years... Otherwise... nothing on the web. So I contacted Pentax Holland, who referred me to Pentax England. I filled in an online contact form and was called up by Pentax Belgium! Who took my question to Pentax Germany. Pentax Germany told me they weren't sure but the lens was probably from '69. They did not have any records of sizes and advised me to measure the lens diameter by hand. My best bet was 34mm. A stepup ring is on the way.