Gasp, drool and splurge: the new Macbook Pro has been delivered

My old 2006 Macbook Pro needed some serious upgrading, something that could only be resolved by buying an entirely new model. I was about to buy the fastest MacBook Pro just before Apple's announcements at the end of October but I held off to hear what they had to offer. I'm glad I did because they announced new, more powerful laptops at lower prices.

Now I own one of the fastest, most power-efficient machines money can buy. I clicked the Purchase button within an hour of the laptop becoming available online. I don't know why, but it was exciting to blow €2800 with a single click.

But the best part of the deal became apparent a few days later. I walked into the Apple Store Amsterdam to discuss some issues I had with migrating from Final Cut Pro 7 to FCP X. The salesperson said: "...ahh, so you must have gotten the 'One to One' deal, then..." I had no idea what he was talking about but as it turned out, the 'One to One' deal means that when you buy a new computer, you can buy free, private lessons for an entire year for only €99,-

My heart jumped with excitement. This was exactly the boost I needed to make the transition. So I am finally migrating to Final Cut Pro X and I am getting personal training to pull me through and answer all my questions. So far I have had 3 sessions and it's a luxury to have a trainer to yourself.

I have paid €1000,- in the past for 5 days of Final Cut Pro training- and that was in a group. Now I pay 99,- for limitless private lessons; now that's serious customer service and marketing.

I had become skeptical of Apple: Apple had lost it's 'cool'/became too big/was the new Microsoft/became the iPhone and iPad company/had dumped FCP 7... in short, had removed itself from their original fan-base and lost its appeal.

But I am a fan again. Apple has done well to invest in education and building a relationship with it's customers. Because as we all know, business is goodwill, making your customers feel good about your product. And for the first time in years, Apple has me feeling happy again. Hallelujah.


I'm a sucker for camerabags. And lately I've been looking for a camerabag on wheels (I admit I'm not the man I used to be...). A nice trolley camerabag  will run you around $400,- and I can't get myself to spend that kind of money. I'd rather ruin my back with my current 'Best Boy' camerabag for my Sony PMW-EX3. (nice bag, by the way, but no wheels...)...

Read more »
Posted by Jeroen Wolf at 5:12 AM No comments:

To shoot a mouse (The Decisive Moment)

I shot a mouse. We've been plagued by mice, lately. Actually, ever since our cat was more or less compelled to move after the arrival of our dog a few years ago, the mice have returned to claim this house at night. Our dog is useless as a mousecatcher. To illustrate her worthlessness as a mouse-repellant: I've seen a mouse go into her feedingbowl and steal six kibbles of dryfood while she was sleeping 3 feet away. She didn't even flinch an eye.
These mice are more brazen by the week and I decided to shoot them. At night, using my camera. I made a timelapse of a mousetrap and grabbed the best frame. The mouse never did take the food. She was an inch away from death.
The great French photographer Henri Cartier-Bresson coined the famous photo-expression 'The Decisive Moment' to characterize a great picture. I guess he meant there is only one moment in photography that captures the essence of a scene. If you're a fraction of a second too late or too early, you missed it.

That quote was made for this still. The Decisive Moment takes on an extra, existential meaning here. To bite or not to bite. A choice between life and death. The Ultimate Decisive Moment. 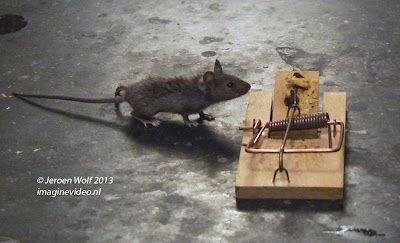 Posted by Jeroen Wolf at 3:07 AM No comments:

RAW video for the 5D Mark 3

About 3 weeks after I bought my 5D Mark III, one of  the most amazing development in recent video-years has been realized by the magicians from Magic Lantern. They have been able to unlock full potential from the camera's fullframe sensor, enabling RAW video to be output directly onto the card.
I am not a technical person and definitely not a pixelpeeper but the amount of information that becomes available not only in terms of dynamic range and color space but also in terms of detail is absolutely phenomenal for every shooter.
I was going to write a piece about my initial experiences with the 5D Mark III, which were not too positive about a few findings that will most likely be completely alleviated by this development: mushy images and dynamic range. There's so much information being pumped out of the sensot at such rates that my Class 10 SD cards won't be able to keep up. I needed a CF card for backup anyway so I picked up one of these cheap Komputerbay 64GB CF cards that can apparently digest the RAW files without exploding... Here are the first RAW video's shot with the 5D Mark III:
Canon 5D Mark III Continuous Raw Video with Magic Lantern (1920x1280 24p) from Andrew Reid on Vimeo. 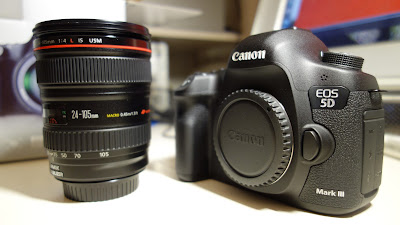 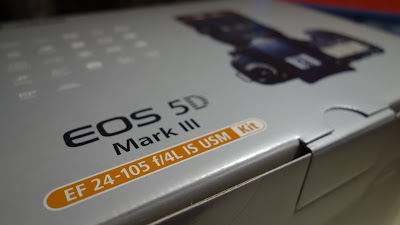 In the fall of 2012 I started noticing a great many people, tourists, wearing the same type of hats with  'Amsterdam'  stitched on them. I thought it was such a curious phenomenon and started to 'collect' all these people wearing these hats, asking them where they are from. I thought they would be from all over the world -and they are- but It turned out that by far most of them are from Italy!

So this is the result 6 months later: a collection of people from all walks of life and from all over the world: United under One Hat…
Posted by Jeroen Wolf at 6:16 AM No comments: