This is a very neat little device that won't set you back a week's pay but adds some fun & unusual functionality to your kit. It's a tripod, is it an antenna? No, it's a steadistick! A very simple tool that people apparently use to photograph themselves.
Why did I buy this? Well, I was kind of disappointed with the way my GoPro helmet-footage looked when I went skiing last month: jittery, choppy images nothing like some of the real steady stuff I had shot with it from the hood of a car or mounted to a toy speedboat for instance...
Then I saw some snowboard footage where people mounted their GoPro to a stick of some sort and someone also mentioned that that was the way to go. I started a search and found a telescopic mounting device for small camera's for 20 euro's. A quick search on eBay and I found the exact same thing for $8,- shipped from China.
It's nothing fancy and I don't know how long it lasts but it's a lot of fun and can get you some real unusual perspectives and steady footage. Try following your dog without this 'monopod' and it will look like crap. Biking or walking footage? Couldn't get these shots without it.(at least not by yourself...)
The best part about it is that it folds up so small it fits in your inside pocket, even with a small camera attached! You can't beat portability on this one. 'The Steadistick- you won't leave home without one'. 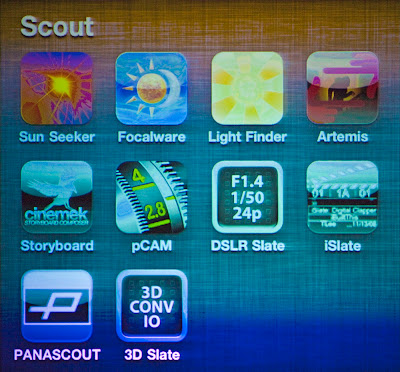 Here's a screenshot of Vincent of the Forest's favorite iPhone apps. I saw Vincent speak last night here in Amsterdam. He is a great photographer, an eloquent & funny speaker and one of the first DSLR filmers. I knew Vincent's name and had seen some of his video work, which looks great btw but to me lacks soul. His videowork so far is an example of technical mastery without a heart. Vincent, so it appeared last night, is a visual artist and a gadget-man, not a storyteller. Vincent likes to shoot from helicopters, get a bird's eye view, have a unique perspective. He doesn't submerge in the pain nor does he get 'up close & personal', to stay in film terms... In that respect it was interesting to see that of all the photographs he showed of New Orleans after hurricane Katrina, just a few were close to actual people. Most shots kept a safe distance and the disaster became a series of impressive yet abstract images. With the exception of a man holding a girl and a photograph of dead and wounded people in an arrival hall (also an overview, yet less distant).
It was also paradoxical after all this grief to see 'Vincent the documentary photographer' making the switch to 'Vincent the commercial director' shooting a $600.000,- commercial shot with a Phantom slomo camera for a shoe manufacturer. Great footage, but going from such human suffering and poverty to this decadent production was hard to rhyme. It invariably made you wonder: is every second of this commercial worth $10.000,-? My answer was no. It left me completely cold. The same for his film Möbius. It's a DOP's production, full of great shots, beautiful lighting and effects. But rather cliché in drama and lacking real emotion. (But I'm sure it was a lot of fun making it!)
To be clear, I'm not trying to knock the guy. He has worked hard enough to earn the right to fool around for a few years and prove himself as a filmmaker. He is a young guy and will get many more chances. I have great respect for his craftsmanship and what he has achieved for himself. But amidst all the fireworks of amazingly perfect images, I was never really touched by Möbius. I clinically hovered over it in awe, like his favorite gyrocopter shooting from the air. I longed for something imperfect and ugly, something real. All this money and talent towards... this? I felt I had seen it before. Coming from someone with a documentary background, I had expected something more.  I hope his next, feature film, will have some more emotional texture. So that his technical wizardry will be matched by more profound content.

For those who keep their eyes open, great deals are still to be had! I got lucky with a lens I've been wanting to buy for months. I was consistently outbid on eBay and I started to feel as if there was some sort of conspiracy to keep me from acquiring this particular lens: the Canon FD 85mm 1.8
But when I was in Austria, lying on my hotelbed after a day's skiing with my son, I browsed the Dutch eBay-site and noticed someone had just posted this lens ( probably an elderly man, judging by the slightly old-fashioned and very concise written description!). I wrote to him asking what he wanted for the lens and when he said €50,- I knew I was about to make a great deal. (I had bid more than twice as much for lesser copies of this lens!) According to the seller it was in mint condition. And when it arrived in the mail a few days later I saw he was right. It was a beautiful, shiny copy. In addition, it came with the original sun hood, a UV filter and the original lens pouch. A steal!
This is a classic; a great portrait lens renowned for its faithful reproduction of colors and lack of distortion. Bargain hunting can be very gratifying...
(Warning: collecting lenses can be addictive and hazardous to your wallet.)

Riding the snow (and eating it)

This was the first time I skied in decades and the very first time my son Tommie went snowboarding. (and our first 'father and son vacation'!) The GoPro was a little disappointing this time: hard to get steady shots from my helmet. (I pasted one of the sticky holders on the side of my rented helmet) I think there is some chest-mount that will yield better results. Had a great time skiing and snowboarding with some great people! (There were many more shots I wanted to try but that would have been at the expense of precious skiing time...)

Posted by Jeroen Wolf at 7:08 AM No comments: