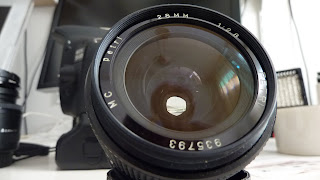 As mentioned in a previous post a few days ago, I bought 6 lenses for a smashing total of 25 euro's just to see what these 'dump-priced' lenses are capable of. I am new to the 'wonderful world of lenses' and I am very attracted to the whole concept of aesthetic subtleties, the way one piece of glass treats light differently than the other and how that affects sharpness, color and bokeh. (the 'bokeh' phenomenon in and of itself is worth an essay all by itself: the mystical word, the way it occurs, the followers and haters of its varying appearances...) But also: the build of the lens itself. The differences and similarities between the way they were manufactured 10 or 50 or 100 years ago. And how old, useless lenses become hot items.

Real photographers spend thousands on one single lens. What does that say about a lens you can buy for 4 euro's? More than the feeling of buying these lenses, I felt like I was salvaging them. Adopting them, if you will. Today I will set out with the Petri 28mm f2.8, mounted to my Canon 550D. This lens looks like new, had a UV-filter attached to it when I grabbed out of the box amongst 20 other lenses. It's an obscure little lens from a company that went bankrupt. I couldn't even find the 2.8 version on eBay! This lens was heading for a quiet, anonymous death. Not anymore. (stay tuned and watch what a cheap little lens is capable of!) 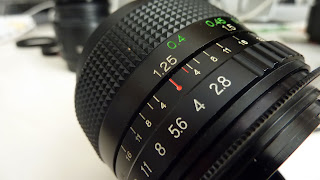